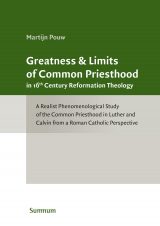 Luther affirmed, in the context of the 16th century, the radical equality of all believers by explicitly referring to the priesthood common to everyone. The priesthood of all believers became a fundamental principle and feature of the whole Protestant reformation movement. This study attempts to thoroughly grasp and re-think Luther’s and Calvin’s notions of common priesthood without the ministerial, to understand better and to shed light upon the necessary mutual relationship between both ministerial and common priesthoods as maintained in Roman Catholic doctrine.