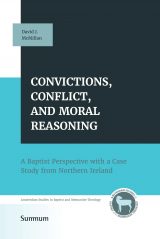 The primary focus of this volume is to bring to the fore the contribution of McClendon and Smith’s work on convictions and the application of that work in helping understand the processes of moral reasoning in the context of conflict. Both were indebted to Zuurdeeg, and their concept was incorporated in models of moral reasoning by Baptist scholars Glen Stassen and Parush Parushev. The usefulness of the concept is critically evaluated.
The volume concludes with a case study on the conflict in Northern Ireland, including the role of religion and the key issues raised in the referendum on the Belfast Agreement in 1998. It includes an examination of the contribution of four Christian groups in Northern Ireland who publicly engaged in this six-week period of intense and passionate debate on the Agreement and the difficult issues it addressed, as the focus for examining and testing the application of the model of moral reasoning. On the basis of the case study is demonstrated that the concept of convictions can prove to be a helpful means of getting to the heart of what drives moral reasoning in contexts of conflict.
The purpose of this book is to issue a call to engage with, critique, and consider the importance and application of a much undervalued methodological approach to discerning the convictions that are the primary influencers of thought and action.